an experience from the stars. blinking, shinning, glittering,

far too far from it all; sends its notice to me through heart and senses,

dusting my mind in powdered confection.

a heart and mind so unfamiliar to mine?

from where could it fall?

i thank the morning for logic unimaginable;

she is a lovely valentine’s morning

a million moon beams transcend from a prism above crinkled sheets

i lite a cigarette from across the room

watching her smile in morning’s sleep

Happy Birthday Abe, Dylan and the rest of you : )

I smell the sweet wind over the dunes

in a warm Maine summer morn.

Papa said it’s fine to dive into the Sea

between breaking waves and sky.

I took his advice.

I surface out of breath, with a smile.

There is no room in the car.”

We left them on the shore of the Sea

as they were saved in memory;

with sparks of lightening in echoes of light.

It was time to go home.

But, she added “not until dawn”.

Wake up! Wake up! It’s Christmas morn! We don’t care where we come from, or were we were born! We’ve seen the gifts in every one’s heart —we have the reason — from where this starts.

Good morning! Scrambled eggs, French toast, home fries, hot cocoa, and coffee dark and local roast. Adulthood peeking into childhood memories. Quietly giggling, mama kissing all our cheeks warm —papa getting dressed, telling us to get ready for church, “to celebrate a birth, in a stable long before we are born, another child in a family melody —poor as dirt”. Long before we understood —long before we could. And — as all children should.

We wake up! Awake, —on this Christmas morn; joyously understanding the meaning —and the chorus of our family’s Christmas song!

marks a home that welcomes song

from a Holy night

[In the Old Testament books, several hundred prophecies about the Messiah and His blessed Kingdom can be found. They are scattered throughout almost all the books of the Old Testament, beginning with the Five Books of Moses and ending with the last prophets Zachariah and Malachi. The Prophet Moses, King David, the Prophets Isaiah, Daniel, and Zachariah wrote the most about the Messiah.]

And so we are born.

(Pastel and Ink by R.K.Garon) 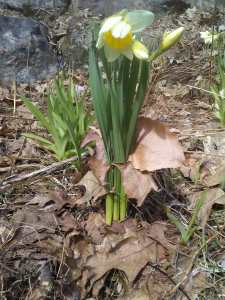 a glitter of rain

against the bark of a tree

—colors glowing in its prism—

is the same light

seen in all life.

has been made known,

for all that look.

—is all they can see—

Photo: R.K.Garon ~The Night Before Breakfast~

Tags: Growing up, http://poetryblogroll.blogspot.com/, Mother's day 2019, Notes Found On The Refrigerator, ~The Night Before Breakfast~

Note Found On The Refrigerator Spring 2019 [and its Source]

Not all Princesses, can become Queens!

Not all Princes, can become Kings!

The gates of this Royal courtyard?

Only Nobles can come through,

for this castle to rule.

Entrance may require everything and anything; bare feet, socks in sandals, just socks, wing-tipped shoes, polished with sheen, or anyone with a broken high-heel. All who are benevolent, where history is irrelevant, and find the moment is only a scene, may carry themselves through the gate that is without a latch or a key  .

Princes and princesses are born

from the same seed —free.

they come to sit at the table

Rising in fragrance through the courtyard, children arrive from the womb with porridge and cream. A meal fit for a king and queen.

Outside the courtyard, some arrive at the gate incoherent and confused, having to learn to stop jumping in place and wait until the wings of Common Spirit carries them silently through.

A kingdom awaits you here. The courtyard gate is the passage through —where you are bound to find your castle; where dreams are a story or two and where children are taught about their wings that once carried you, through.

A Reality Sandwich and An Ice Cold Existential Beer

two in the afternoon

a burger with a thick slice of onion,

mustard on the side

and a cold bottle of beer.

looking out a large pane window,

everything from where I sat

you pass by noticed,

i nodded with a smile.

puffed in a white cloud of history,

dowsed by another sip

of an ice-cold beer.

I was looking through old pictures today —some scratched and beginning to fade.  You were beautiful, impressionable, and innocent; packing lunches and having picnics, going home after chilled wine, crackers, Vermont cheddar cheese, and dark chocolate.

My heart sank. I had to put them away —unable to find the joy in reviewing history. Remembering all the missteps I made when I was young, fearless, sometimes arrogant, misunderstanding love and its commitment. I drank the wine not savoring the chocolate.

I will get back to them someday —but, for now, this evening, I will listen to Lake Winona. In-between the silence and dobs of the lake’s small rolling waves. I place the photographs beneath the bed I made.

Lake is playing a love song

Under slow shrinking shadows of a receding August sun, squatting near a dribbling tidal pool, four children stare attentively to a small snail; as it furrows and squiggles through the sand, racing to meet the outgoing tide.  They were sent there to “think”. To work out the “argument” they had among themselves.

They were told to go to the cove; “to seriously think about what each other had said and what they shouted to each other”.

All four, ignoring each other, watched quietly as the small snail furrowed and scrunched up little piles of sand behind it. The trail squiggled slightly left, then slightly right. It was heading towards the trickling edge of an out-going tidal stream.

Never straight with their curves and bends;

Listening to instinct, racing the tide, the snail

Made steady headway towards the sea.

The children glanced up occasionally to see what the other was doing. They could see the tide ebbing away in a methodical hush. The sun sinking, shed its soft orange and crimson color glistening on the expanded beach sand.

No one was talkin’. All of them, were still trying to remember what the stupid argument was all about anyway? It wasn’t a fight! Hey! None of us cried! We didn’t tell anybody to shut up! That’s for sure. we just had… an aah, aah, a disagreement!…as their minds ping-ponged in thoughts and rattled on.

With purpose, the snail inched on

Ignoring the circling birds and their potential grip

For an eventual fatal drop to the flats;

It was getting cooler. They hardly took their eyes off the steady movement of the snail. Except of course, to sneak a peek; checking on each other. They began inching themselves closer together to keep warm and hoping the others “weren’t still mad at them” for whatever they said, or for  whatever they got wrong.

Never dawdling, clinging to its direction

Pushing the sand aside, racing to catch the tide,

The snail forged on.

Tide water was slipping into drying sand with each forward push and receding splash. The children, realizing it was getting late, were looking up at each other more frequently. They could smell supper on the camp grill. They were ready to go back.

The snail stopped, as if out of breath.

But, only for the moment.

Suddenly, the ocean swelled and peaked into a fast rushing froth, it grabbed and pulled the snail. It slid, tumbled, snapped up in surf and foam, flipped, and swallowed into the bubbling, boiling sea.

All four children, now on their feet watching, caught sight of the snail scooped up in retreating swirling sand and glittering pebbles of a retreating wave.  “There!” The children shouted to each other, pointing to a distant crescent wave pulling away from the shore, “There” on the surface, sitting tall, proud and smiling, was the snail. He looked back at them, waved and shouted an exhausted but jubilant, “Tally Ho!”

They simultaneously faced each other, eye to eye. “Huh?” Then, pumping their fists, all exclaimed, “It made it! YES!” Then grabbed each other’s hands with a burst of laughter; apologies were unanimously accepted. They skipped and dragged their feet making their own squiggly trail, left then right  along the warm drying beach.

Supper on the grill, chocolate milk, and stories of a “swooshed up snail they ‘FOREVER’ followed,” were animated in the evenings’ bright open fire light of flaming marshmallows, burning, blown out, and squished on chocolate squares between graham crackers and pushed into sticky lips with anticipated delight.

I heard it all slide into the clapping sound of incoming waves announcing the tides transition from low to high. It was bedtime, clean up, and evening prayer. Kissing me on the cheek and with a blessing, they all took their day in stride, sharing in the applause of the snail’s completed race and an encore for the ever-changing tide.

Listening to the tide, as we watched the children disappear into the tent, I on one knee poke the dying fire. Good thoughts were sent to the children; forgetting their disagreement without anger, melancholy, or disappointment. And, a mindful poke from Katie’s marshmallow stick, smiling at each other, as she spread the dimming embers, for a happy jubilant snail.

Leaves are dancing in rhythm with the wind.

Colorful chaos prances through woods and on soil.

I kick dust-up behind me —before it settles cold.